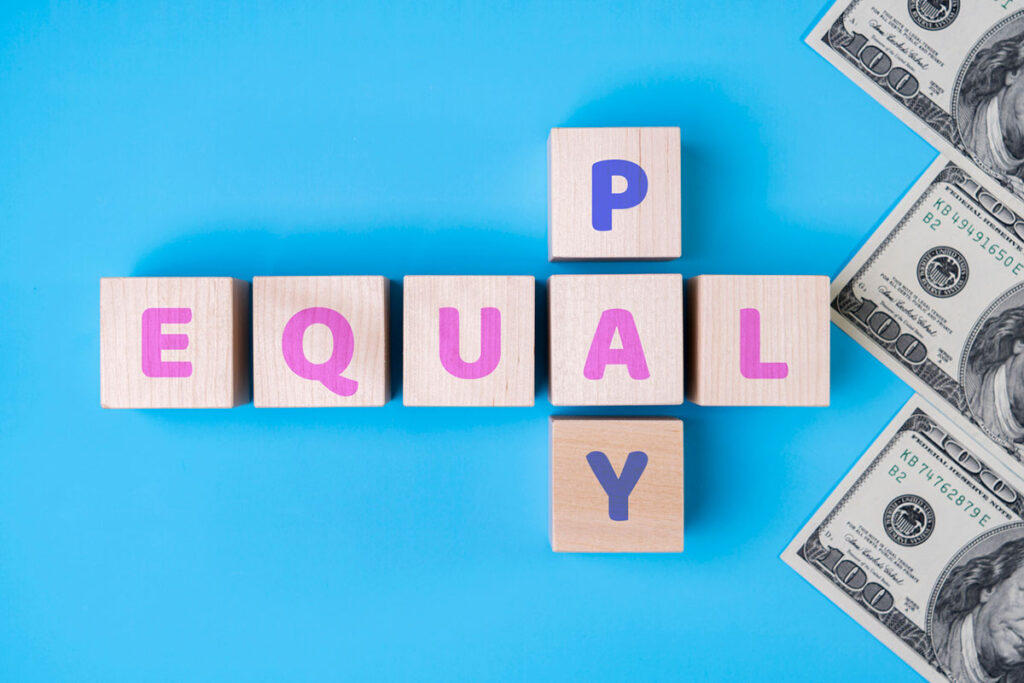 Fair pay is considered to be a reasonable wage for the specific work that has been performed. But fair pay does not necessary mean equal pay. The Equal Pay Act by the Equal Employment Opportunity Commission states:

“The Equal Pay Act requires that men and women in the same workplace be given equal pay for equal work. The jobs need not be identical, but they must be substantially equal. Job content (not job titles) determines whether jobs are substantially equal. All forms of pay are covered by this law, including salary, overtime pay, bonuses, stock options, profit sharing and bonus plans, life insurance, vacation and holiday pay, cleaning or gasoline allowances, hotel accommodations, reimbursement for travel expenses, and benefits. If there is an inequality in wages between men and women, employers may not reduce the wages of either sex to equalize their pay.”

Although this is in effect for the U.S. by the EEOC, it does have its loopholes. Those very loopholes are exactly how fair pay and equal pay are not considered the same thing; thus, resulting in a pay gap between different genders without breaking the law. In order to ensure fair pay throughout your organization, there are different techniques that can followed. Though there may be variations among these, based on what your organization entails through daily use.

The Importance of Fair and Equal Pay

As the year comes to a close, it is important that the issue of fair and equal pay be brought into focus. There are a variety of reasons for pay inequality, but that should not place limitations on fair and equal pay for equal work. Let us recognize just how unfair the pay gap is by putting it into context.

With these staggering statistics coming into play, it is crucial to recognize that there is a clear wage gap between different ethnicities and genders. No matter how you slice it, there must be action that should be taken in order to ensure that all diverse backgrounds and genders receive the same fair and equal pay based on equal work within an organization.

Techniques to ensure fair and equal pay for equal work are a dime a dozen. Without a doubt, there are countless ways that organizations can take a walk through these ideas in order to be equal all across the board. So, although some of these techniques may not fit your organization, the chances are that at least a couple of these will resonate with some form of success. Regardless of the level of success, the importance is the ensure that men and women, regardless of education level, ethnicity, age, or other diverse factors to receive equal pay for equal work. In order to do that, you must begin at the top.

Those in a leadership (or managerial) role are constantly on the forefront of working with employees. Therefore, those people play one of the most critical roles of ensuring equal and fair pay for equal work. Ensure that when new hires are brought onboard with your organization that they receive the same pay as Joe Smith who is in the same position with the same job title. Regardless of their level of education (as long as they meet the criteria to apply for and gain the position) or background, they will be just as equal to the next person who does the same (or similar) work.

Ensuring that questions will not promote any specific bias is the start of hiring someone perfect for the role. Additionally, it helps with set structured questions to guarantee that the position that has a newcomer will have the best set of experience needed. This will ensure the experience matches fair and equal fair.

Sure, your employees will want to talk about their wages, but that is often frowned upon by different organizations, employees, and even human resources. There is no better way to upset your employees than for them to open speak about their pay wages only to find out that someone hired in after then who has less experience and is a suck-up makes almost $20k more per year than their equal counterpart who works their tail off.

In order to prevent this from becoming an issue, it is essential that you offer open disclosure for different roles and titles as soon as someone applies for a position at your company. Now this does not necessarily mean that everyone hired for a specific role makes the exact same amount, down to the dollar amount. But this does mean that you offer full transparency for the range that the role may offer, depending on experience, background, etc. To better understand this, here is an example to allow such:

When someone applies for the senior technology consultant role, they have the opportunity to make no less than $76k per year, but no more than $91k per year. This allows a small window of up to 20% to be added to the base salary. This is considered a fair and acceptable range. If your Human Resource division is comfortable with a salary formula being disclosed, this can be an avenue to take as well.

Offer a Compensation Audit on a Quarterly, Semi-Yearly, or Yearly Basis

Set aside time to offer a compensation audit for your employees on a regular basis. In most instances, a yearly audit is perfectly acceptable, normal, and fair. But in certain instances, such as when opting someone for a new, greater position, a quarterly or semi-yearly audit might be more appropriate in order to set them up for the correct pay that is both fair and equal.

Ensuring and implementing fair and equal pay begins with your organization. Choosing to ignore this issue will not allow it to go away, even over time. The best way moving forward is to combat it at full-force and handle it as your practice sees fit. The time to move forward into a fair and equal future is now and your business holds the power to do just that.