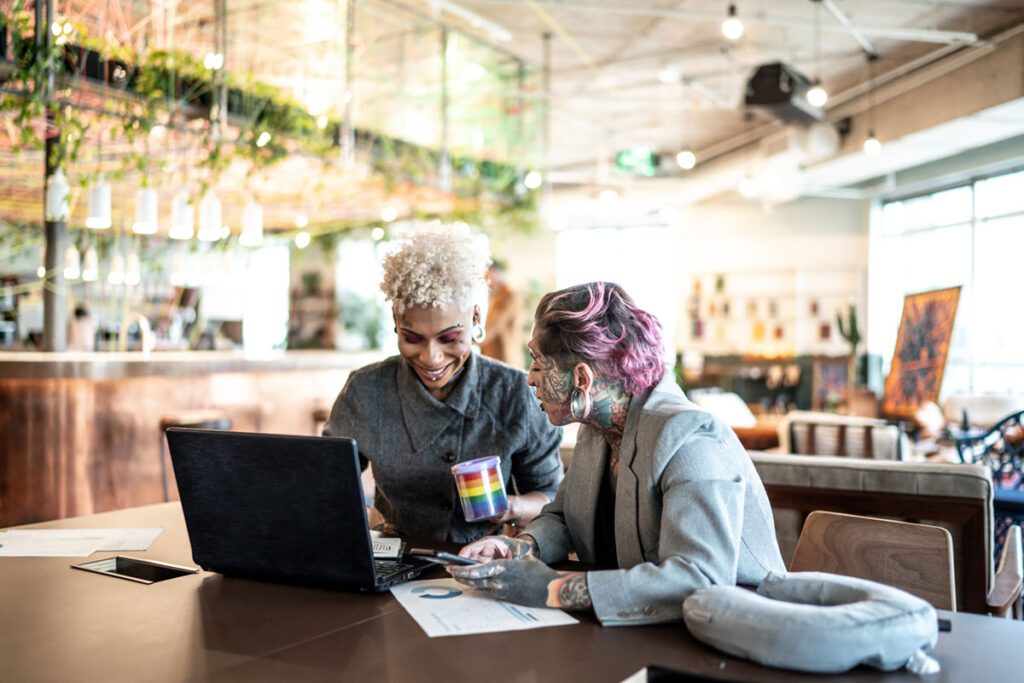 Fostering an inclusive workplace can mean a number of things must actively fall into place. Diversity, equity, and inclusion (DEI) have become the new norm for organizations throughout the globe. But there is more to fostering a culture in which everyone feels accepted for who they are and what skills they bring to the table.

Today’s society presents obstacles that men and women alike feel compelled to avoid as employee and corporate backlash can prove to be trivial in itself. Factor in an absolute lack of support from those who surround you, and you can feel flabbergasted at just the thought of being part of the LGBTQ community without others knowing.

Being able to navigate the basic day-to-day problems in the workplace is enough for some, regardless of their stance on sexual orientation or gender identity. For those who are battling a gender identity crisis, especially while employed by a substantial organization, this can present an even bigger challenge for themselves, as well as their colleagues.

Everyone desires to feel a sense of inclusion, no matter what career path they choose to take. Attaining an absolute inclusive environment requires passion, awareness, policies, and support from others. A fully inclusive workplace will help employees become aware, be able to navigate their problems, encompass the support of their co-workers, boost their skills, and create a positive environment for all to feel comfortable in their own skin.

The idea of coming out as gay, bi-sexual, asexual, transgender, or questioning is a fear that members of the LGBTQ community are already familiar with. But there are diversified individuals who have chosen to not yet reveal their gender identity, sexual orientation or preference to the closest of family, friends, and even co-workers. The thought alone can be a catalyst for extreme levels for anxiety, emotional distress, depression, fear, and the worry that they could become excluded socially in the workplace. All of which are perfectly normal and acceptable to embrace.

LGBTQ workers need to know they have the support of everyone they work with, including supervisors, fellow co-workers, and entry-level interns and this is not easily attainable. In fact, Just a little bit more than half of all LGBTQ workers that are currently employed in the United States have chosen to keep their sexual orientation or gender identity a secret from their co-workers, even if it means they are currently out to the people they value the most in life.

The core causes for keeping themselves “in the closet” especially in the workplace is due to a fear of being rejected by co-workers, being treated in an unfair way, or most of all, the fear of being discriminated against. Those who have chosen to remain quiet should not feel this way, especially with all of the DEI at work throughout organizations worldwide. LGBTQ workers who have chosen to come out while employed are often treated differently.

Those who have come out to their supervisor, manager, or higher ups within an organization are much more likely to be treated with discrimination in the workplace than those who come out to a co-worker first or are openly out from day one at their organization. As a result, these employees may decide to shift their physical appearance entirely in order to avoid being outed by their employer or mistreated by co-workers. It goes without saying that this is heartbreaking for them to have to endure. No one deserves this sort of treatment.

Employees who fall into the LGBTQ category often attribute the reason that they choose to avoid coming out to a complete lack of support by their workplace. As inclusion shifts from a trend to a long-standing movement, it is essential to promote positivity among employees and not allow there to be any sort of unfair treatment implemented on them based on their uniqueness. Yet, the idea versus the movement are two completely distinctive notions and most organizations lack the ability to recognize the difference between the two of them.

A much-needed change needs to occur in order to help boost morale of our LGBTQ workers. Creating a diversified and inclusive workplace is a concept that most organizations are familiar with, but many will fail to yield the right results. A true inclusive environment is one that drives support for all employees, especially those who choose to come out to their co-workers for the first time ever.

To boost the level of support for employees, there must be policies, procedures, and protocols actively in place. Inclusive polices will help your organization create a safe, inclusive, diversified workplace that everyone feels contented to be part of no matter their title or position.

The Equal Employment Opportunity Commission (EEOC) is responsible for enforcing laws which prevent discrimination against certain gender identity or sexual orientation within the workplace. The laws enforced by the EEOC are mandatory for both state and federal level, which makes discrimination a crime that could result in an investigation, lawsuit, or punishment that could end in fines or jail time.

All organizations must follow the guidelines set forth by them. But it is up to your organization to prepare additional policies and set forth enforcement of them in order to make certain that no one feels socially excluded or discriminated against. Additionally, there is a fine line between the two and it’s important that your organization walk that line with prestige. By attributing your workplace to follow inclusive policies, you foster a safe space for those who wish to come out, while helping them to feel comfortable enough to do just that.

Encourage acceptance of everyone, especially LGBTQ employees who desire to openly express themselves, but fear the setbacks they might incur. Rather than introducing a platform of biases, craft LGBTQ support through a variety of facets. Ideally, it is best to offer inclusive training sessions. These training sessions will help your organization to understand the importance of avoiding non-inclusive language or conversations. Diverse communication to avoid social biases and help diversify your environment is another important aspect to include. Education of awareness is a critical component to help foster inclusion amongst those who choose to come out at the workplace.

Respect is universal and everyone deserves the same amount. No matter what type of diversity they bring to the table, everyone deserves to be treated equally. Mistreatment can lead to discrimination and a lack of support all around. Co-workers who confine in one another are not looking to go public with their status, so be kind and respectful of how to approach them. Outing someone is never OK and should have real world consequences at the workplace if the instance occurs.

Be prepared to engage with employees. Open, supportive environments are the ones that retain the best employee. Celebrate everyone equally because when employees are fueled by a supportive and inclusive organization, they are best prepared to offer their best ideas and productivity. But most of all, this offers everyone the opportunity to be comfortable in their own skin without judgement from the environment that surrounds them at work.