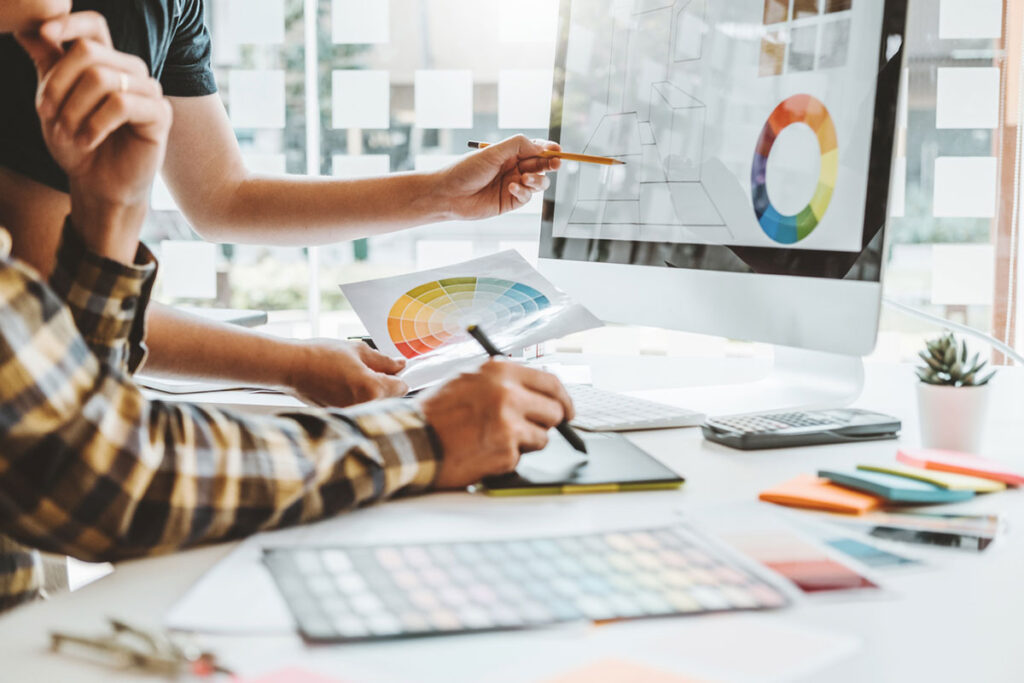 There are over 6,000 diverse languages spoken around the world. However, the average person can only interpret and speak roughly two to four of them. With a little over 7 billion people wandering around earth, this leaves an undisputable language hurdle. So, how is this handled? Through the use of universal symbols and other forms of graphic design to execute visual communication.

What Is Visual Communication And Graphic Design?

Visual communication is the art of using visual elements such as bold colors, lines, textures, shapes, and a balance of images to convey a message to the audience through two-dimensional, three-dimensional, or in rare instances four-dimensional pieces. This is executed through the form of art, like that through advertising to represent a brand or an image.

Universal symbols are pieces of graphic design that conveys information, while being globally renowned. A well-known example of this is the stop sign, which happens to be a red hexagon shape with the word “stop” inscribed in the center of it. This is recognized worldwide, regardless of what side of the road you’re supposed to drive on.

Other universally recognized symbols include the peace sign, the recycle symbol, directions (such as arrows), and the most-newly noted, Wi-Fi (or internet). This type of graphic design is used to communicate information, in the simplest way possible. Communicating this type of data is the ultimate use of visual communication and helps to ensure everyone understand the same message, regardless of language barriers.

Visual communication has further become popularized through means such as politics, advertising, and even social media. Platforms such as Instagram, YouTube, and TikTok have utilized graphic design through images, videos, infographics, and most of all, memes. This has helped spread messages to the masses. But why has social media turned to a form of communication?

The science stands true. 90% of information transmitted to the brain is visual. 65% of the population are visual learners. Humans retain 80% of what they see. Our brain processes visuals at a rate of 60,000xs faster than any written text.1 In layman’s terms, we take in what we see and process it in a better way than what we read.

No matter what the message is, how big or small it is, or who it is trying to reach, social media has demonstrated to us that visual communication works. By using the right means of graphic design, any piece of visual communication can go viral in little to no time. Take for instance, the Instagram post of an egg (yes, just a simple egg). On January 4th, 2019, the egg was posted on Instagram with one goal – get the most likes on Instagram. At the time, Kylie Jenner held the current record for the most likes on an Instagram picture with just over 18 million.

The egg, which sat on a simple white backdrop, went viral and shattered Kylie Jenner’s record in just 10 days. The sole purpose of this simple piece of art was to become the most liked picture on Instagram. Little did Eugene (the creator) know, it would soon become the most liked picture on the internet. It became known as “The Egg that Broke the Internet.” To this day, it still holds the record at a whopping 55 million likes.

Importance Of Graphic Design In ELearning

Social media has shown us that graphic design resonates in our everyday lives. Visual content is a means to communicate, all while not using a single word. Although it may seem a bit unorthodox, it provides insight to just how visual communication can be used to reach millions.

The same techniques can be applied to learning, whether through eLearning or in person. By using visual content with lessons, we can easily recognize the value in a piece of digital art and relate it to the lesson we are being taught. This is true for a span of ages ranging from 2 to 100. Boosting visual communication through eLearning means students will have a higher level of knowledge as they read and see it simultaneously, retain more of what they learn, and be able to take it all in at an alarmingly fast rate.

Using graphic design is the ultimate form of visual communication. Without this, even the most carefully orchestrated message, may be lost in translation. In order for us to be successful through eLearning, we must first master the art of visual communication and understanding just how it best works for us. Through the careful means of visual content, messages can be conveyed across the world, no matter what language you speak.

PrevPreviousSafe At Any Speed: Creating Psychological Safety Is The Key To Innovation
NextGraphic Design: Today’s Ordinary Is Tomorrow’s ExtraordinaryNext